Girls vs Boys With Autism

HomeKidsGirls vs Boys With Autism

The last few years have seen an upsurge in awareness of the differences in boys and girls with special needs. Neurodivergent males, the experts now say, are usually easy to spot whereas females with similar challenges present different, more subtle symptoms, often slipping through the diagnostic net as a result.

It’s a theory that resonates with Andrea, who lives in Kent. She has two children – her son, Oscar, is fifteen and has ASD, while her daughter, Maisie, is twelve and has ASD and dyslexia. Although, she says, her son’s difficulties have always been obvious, it’s only recently that the family has realised that Maisie is autistic, too. “She’s always struggled with anxiety but we never thought it might be connected to ASD,” Andrea explains. “But now we know, I think, ‘Why on earth didn’t I notice it before?’”

The difficulty, Andrea points out, is that girls are much better at covering up their social challenges. “I think girls are more concerned about ‘fitting in’ so they hide how they’re feeling,” she comments. “Maisie is able to make friends quite easily but she struggles with boundaries. She doesn’t always recognise when someone is treating her badly which means she often puts up with more than she should. Oscar, on the other hand, finds it more difficult to make friends but when he does, they’re a friend for life.”

Girls With SEN Take a While to Trust

SEN Tutor Debbie has been working with students with special needs for almost three decades and is also the mum of a neurodivergent daughter. She agrees that girls with SEN present differently, commenting that her own daughter also suffers from anxiety and OCD. Whereas the traditional idea of a young man with autism is someone obsessed with trains or Lego, Debbie says that her daughter’s fixations have been on things that are generally considered more ‘girly’ such as make-up and horse-riding.

“When it comes to my students with special needs, I’ve found that the girls are usually more affectionate than the boys,” she continues. “If they like you, they’ll stroke your hair and want to sit next to you. In contrast, the boys tend to express their feelings if they don’t like you.

“On the other hand, the boys I work with seem to be more trusting that you’re on their side,” Debbie elaborates. “Girls can be more suspicious and it takes time to build a relationship with them. I tell them about my life and show them photos and talk to them in a relaxed way as if we’re having a cuppa on a Sunday afternoon. But that’s important for both boys and girls – unless you can build a connection with them and give them a positive experience, it won’t work.”

Sarah Wild is Headteacher at Limpsfield Grange in Surrey, the UK’s only school specifically for autistic girls. The pupils there benefit from a single-sex environment, Wild says, because they have different needs from their male counterparts. “Girls with ASD usually have a greater desire for social connection,” she explains. “They want to please and conform so they copy other people’s behaviour. Unfortunately, they might also believe everything they’re told and may not notice when someone is being unkind – which can make them vulnerable to all kinds of manipulation.”

Because of this, Wild continues, staff at the school are open and honest with the students about the challenges they might face as they move into adult life. “We tell them that there is more social pressure on all women and that they are generally expected to have better conversational skills than men,” she points out. “They will be expected to be able to take part in reciprocal conversations.

Focusing on a Positive Future 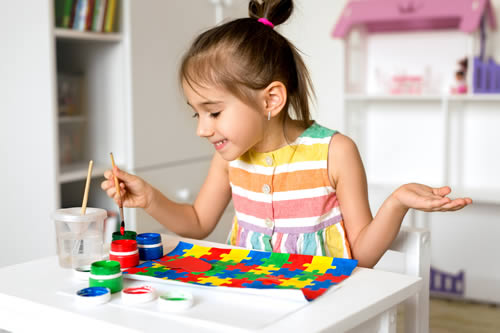 “But we’re also realistic,” she continues. “We say, ‘Look, how much of the neurotypical world can you manage? Would it suit you to work part-time? Work from home?’ If autistic people have to spend too much time being social, it’s easy for them to ‘burn out’.”

Although there used to be an idea that girls with autism were often tomboys, Wild says this is very much not the case these days. “A lot of our students are very glamorous,” she comments. “Focusing on their hair and make-up is a way of conforming. A lot of them are interested in Japanese culture and Manga.”

Above all, Wild concludes, Limpsfield Grange promotes a positive approach to autism. “We celebrate it! Autistic people have amazing skills. Having ASD isn’t a catastrophe.”

Get Expert Help From Our Specialist SEN Tutors >>

Working With Boys With Special Needs